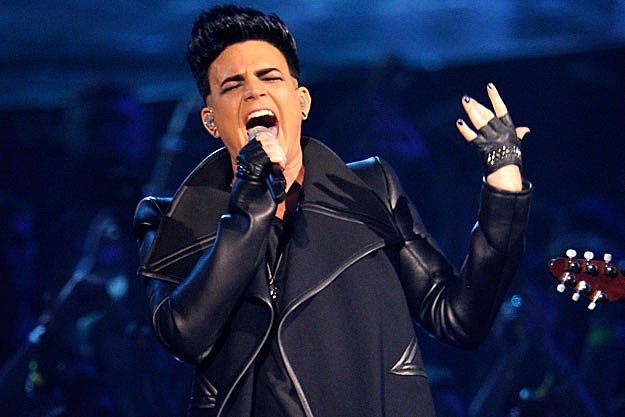 It's Adam Lambert's birthday on Sunday, Jan. 29, and as the singer approaches the Dirty Thirty, we're counting down some little-known facts about the acclaimed singer so you can get to know him, well, "better than he knows himself." From his early life and career to his stint on 'American Idol' and his many accomplishments since, help Lambert ring in the big 3-0 with our list of the Top 10 Things You Didn't Know About Adam Lambert.

When Adam Lambert went on Jay Leno in 2009, Leno asked Lambert if he had been "plucked" from obscurity. Lambert replied that since he'd already been working as a musician, he wasn't exactly "plucked," and added that plucking was fine by him, just as long as it was "safe plucking." We're only surprised that no safe plucking advocacy groups have recruited him to be their spokesman.
9

Adam Lambert knows how to party hard — as evidenced by a few high-profile incidents. Memorably, he was kicked out of Lady Gaga's birthday party last year, after acting "super sloppy embarrassingly drunk," about which Lambert later tweeted: "Was trying for celebratory gesture 4 gaga's B- pinata style...instead my fist is all bruised and la cita has a hole in the ceiling. #sloppy." Then, he and his boyfriend Sauli Koskimen were arrested for fighting in Finland, which Lambert chalked up to "Jetlag+Vodka=blackout." It happens to the best of us, Adam!
8

Adam's been working with A-list hitmakers on his next album, 'Trespassing.'

There's no shortage of talent to be found on Lambert's upcoming album 'Trespassing,' due out on March 20, with Lambert and company calling in the big guns to produce some major pop anthems. The lead single, 'Better Than I Know Myself,' was penned by 'X Factor' vocal coach Claude Kelly and produced by uber-hitmaker Dr. Luke, with other writers and producers slated to appear including Bruno Mars, Bonnie McKee, Pharrell Williams, and even music legend Nile Rodgers. With a talent roster like that, 'Trespassing' is sure to be massive — and early reviews have suggested just that.
7

He believes rock 'n' roll is all about attitude.

All the glitter and glam don't mean a thing — according to Lambert, at least. Despite his dramatic looks and crunchy pop-rock hooks, he says that he's way more interested in rock 'n' roll as a perspective than simply as a sonic goal. In June 2011, he tweeted, "I personally believe that rock n roll is just as much a frame of mind and attitude as it is a musical style. Rebellion." If it's all about attitude, we're pretty sure that Lambert's got it covered — his rock and roll swag is unmatched.
6

He stays on top.

Double entendre ahoy! There are so many adorable Adam Lambert moments to choose from that it's hard to narrow down the field, but one of the finest must be his now-infamous interview with 'US Weekly' back in 2009, in which he sat down alongside 'American Idol' winner Kris Allen for a chat about life post-'Idol.' When the interviewer asked them who would take the top bunk on the 'American Idol' tour, Lambert blurted out, "I like the top!" Allen then shot Lambert a pointed look, before the two erupted into peals of laughter. We won't dig too deep into this one, but it's nice to see that fame hasn't spoiled Lambert's good humor.
5

He's un-glamming and getting vulnerable on his next album.

Lambert might be well-known for his liberal use of eyeliner and theatrical performances, but expect the glam-o-meter to be dialed down in his upcoming work: He says that he's after a more "organic" sound on 'Trespassing,' as already evidenced by the scaled-back power balladry of 'Better Than I Know Myself.' Lambert told Billboard that with his debut album, he "really wanted to go glam," but he's "drawn to music and artists that are singing from the heart about real things," so listeners can expect his next release to be "less campy." Either way, we're counting on 'Trespassing' to deliver high drama — even if it's more emotionally than sonically dramatic.
4

Lambert's hyper-devoted fans keep up with every detail of his life and work, but he tries to keep his work at the forefront — as he explained to 'Access Hollywood' in a recent interview using fan questions. When the host explained that most of the questions collected from Lambert's Twitter fans were about his music, rather than his relationship with Finnish reality star Sauli Koskinen, Lambert was delighted to hear that fans were more interested in his creative output than his personal life. "I'm a professional musician," he laughed, "not a professional boyfriend." Could have fooled us — since Lambert and Koskinen, despite the occasional fight, seem quite devoted to each other.
3

He's been known to kiss the ladies.

Lambert courted controversy and right-wing backlash by kissing another man on stage during his famous AMAs performance, but he's not exclusive when it comes to kissing. In a Twitter interview, he said that his first kiss, at age 14, was "with an 18 yr old fierce black girl from Compton." It's not a habit he's outgrown, either: In 2010, he and fellow glitter diva Kesha found themselves grinding at a nightclub and got carried away in the heat of the moment, making out on the dancefloor. Lambert said that K$ tasted like "Goldschlager and maple syrup," while Kesha reported that Lambert's mouth tasted like "blueberries and champagne." Some people would call that "TMI" — but we're sticking with "EEI," for "Exactly Enough Information."
2

His fans are fearless and ferocious.

Lambert has one of the most passionate fanbases of any musical artist — which is all the more impressive considering he's only released one album. His Glamberts are an incredibly active group of fans, taking to Twitter and Facebook to document his every move, interview, and performance and rally together to help get their man to the top of the charts. They'll pay $20 a copy for magazines which feature Adam on the cover and they've even got their own dictionary. For his part, Lambert is hugely appreciative of his fans, and why shouldn't he be? The Glamberts keep fighting for Adam, day in and day out, and we love them for it!
1

Surprisingly, Adam is not perfect.

In the recent teaser for the video for his newest single, 'Better Than I Know Myself,' Lambert explains the message of the song, which is about admitting "Look, I’m sorry, sometimes I know I’m not perfect, but without you I don’t know what I’d do with myself." Even with electrifying performances, killer albums, chart-slaying singles, and an unrivaled fanbase? We think the Glamberts would be inclined to disagree.
Filed Under: Adam Lambert, Hot AC, Pop, Rhythmic
Categories: Lists, Original Features
Comments
Leave A Comment
Back To Top
Liv Tyler Shares COVID-19 Diagnosis and Symptoms
Black Man Helped by Mental Health Officer Day Before Shooting Death (NEW VI…
Police Bracing for the Worst on Inauguration Day in Major Cities Across U.S…
Netflix Omits Controversial Episode from MTV's 'The Challenge&apo…
Andrew Zimmern Says Prisoners Need Better Food, Even Capitol Rioters
Marshall Faulk 'Worried' For Trevor Lawrence, Urban Meyer Can&apo…
Ralph Macchio -- Good Genes or Good Docs?!
Stars and Scars -- You Be the Judge
Latin Singer Chesca Positive for COVID, MLK Day Performance Still On
Capitol Rioter/Texan Realtor Asks Trump for Pardon After Arrest
Virginia Man Arrested with Gun & Ammo Trying to Breach D.C. Checkpoint