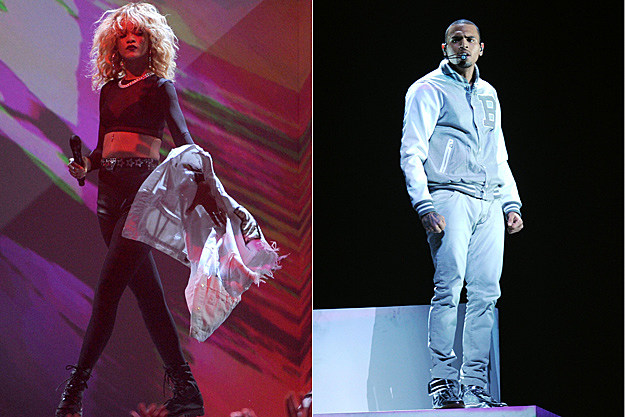 Chris Brown and Rihanna shocked the world when it was revealed that he would be featured on her 'Birthday Cake' remix. Predictably, fans went into a frenzy on Twitter. While Team Breezy was happy to hear of the collaboration, Rihanna's fans had much more mixed, polarized reactions. Some were happy to see the ex-couple reconcile (at least in song), while most were furious that she would let the man who assaulted her three years ago sing on one of her tracks.

For her part, Rihanna released a series of somewhat cryptic tweets once the news broke, some of which pointed at a renewed relationship with Brown, while others were defiant against critics of her decision. "Its all about mastering the skill of ignoring ignorance! #1LOVE," she wrote (she's previously referred to Brown as "#1LOVE"). Later she tweeted, "Chiefin' while ppl spend hrs on letters... *kanye shrug* #phuckit." Brown has yet to comment or tweet on the matter. In any case, the decision garnered strong reactions across the board. Here were some that stuck out to us in particular.

It's like an Ike and Tina reunion with less talent "@PasteMagazine: Chris Brown To Be Featured on Rihanna's New Single http://bit.ly/wS927Q"
I feel bad for Rihanna, we're quick to judge but who knows what we would do if it was us. like I said before, we can't help who we love.
Careful the battles you fight for other people,look now Rihanna has left you here fighting Chris Brown& she is on her way to a song with him
Apparently Chris Brown is working with Rihanna on her new album. He's supplying the beats
Everything Chris Brown does, someone always has to bring Rihanna into it. -Chris Brown breathes- "BUT HE BEAT RIHANNA!" Just shut up.
To all the people joking about Rihanna needing to have "some sense beaten into her," please see yourself off of this planet. Thanks.
Chris Brown Hits Her; Eminem Lies To Her; Drake Can't Remember Her Name. Welcome To The Life Of Rihanna... Oh Na Na Thats Ashame.
I honestly don't see how anyone who's read the police report detailing Rihanna's injuries could still be a Chris Brown fan.
I feel bad for Rihanna. :/ She has never once mentioned anything about Chris being on BC and yet she's being judged.
They hit the nail on the head. 1 of the biggest reasons why the public is okay with Chris Brown is because Rihanna has never said anything.

What Do you Think About the Collaboration?

Sound off your comments below on whether you think it's OK for Chris Brown to be featured on Rihanna's 'Birthday Cake' remix.