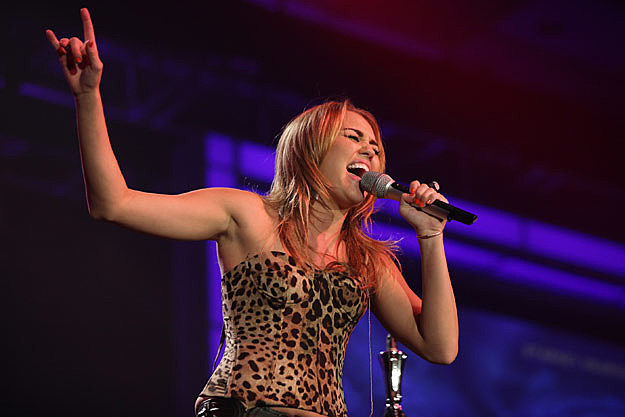 Miley Cyrus is one of the most successful young stars of the 21st century, making huge strides in both her music and film careers all in her teenage years. In just a few years, Cyrus has built an empire stemming from her leading role in 'Hannah Montana' on the Disney channel. She now has a huge international fan base, has set out global tours, two Top 10 albums (with 'Breakout' landing at No.1), and a plethora of movie roles on her impressive resume. On this list, we pay tribute to the superstar with 10 things you might not have known about her. So sit back and get to know Ms. Cyrus on a more personal level.

Even though she's from Tennessee and her dad, Billy Ray Cyrus, hit it big in the country scene, Miley won't be recording country music any time soon. "It scares me … It feels contrived on so many levels," she said of the genre. "Unless you’re wearing a cowboy hat and cowboy boots and singing and whining about your girlfriend or boyfriend leaving you it’s not going to sell. I think that’s why my dad finally got out of it. You have to wear those cowboy boots and be sweet as pie. It makes me nervous, the politics of it all."

She is good friends with Demi Moore and Kelly Osbourne.

Kind of surprising group, right? Miley worked with Moore on the set of the 2012 flick 'LOL,' and the pair quickly hit it off. "It really felt like Demi was my mom a little bit because we had such great conversations, and I feel like it shows on-screen. I can't wait for LOL to come out. It's what I'm most proud of," Cyrus said to Parade. Kelly Osbourne and Miley are also friends, and the fashionista even planned Miley's 19th birthday. "I see her on the same level mentally as me," Osbourne, who is eight year older than Miley, said of her close friend.

Miley supports gay marriage and doesn't care who knows it.

When asked on Twitter if she supported gay marriage, Miley Cyrus wrote that "there is no other judge but God" and that she "believes in love." She quickly received a lot of backlash over the statement, but didn't back down. "That seems very interesting that someone can be hated because you want someone else to love another person. It seems very twisted to me," she said on 'Ellen.' "I never regret what I say when I speak my opinion because if you ask, I'll tell you." Cyrus even has a gay rights symbol tattooed on her left ring finger.

She once vowed to "ruin" Radiohead.

This is a pretty bold statement considering Radiohead are one of the biggest alternative rock bands of the last 20 years, but Cyrus isn't afraid to speak openly in public. A few years back, Cyrus proclaimed her love for Thom Yorke and co. and asked if she could meet them. When Yorke, who is painfully shy in reality, and his band refused, Cyrus was so hurt that she started referring to them as 'Stinkin' Radiohead' and said, "I'm gonna ruin them, I'm gonna tell everyone." Keep in mind that Miley was very young when this occurred -- rejection never feels nice, especially when you're a teenager.

Miley Cyrus was actually born Destiny Hope Cyrus, but her parents gave her the nickname "Smiley" since she was such a happy baby. Eventually, Billy Ray Cyrus and her mom Leticia shortened the nickname to Miley. Cyrus officially changed her name to Miley Ray (in an ode to her dad) in 2008, and apparently her grandma is the only one who calls her Destiny.

Her boyfriend finds her sexiest when she's eating steak.

Miley's super cute Australian boyfriend, Liam Hemsworth (who starred in 'The Last Song' with her as her male love interest), doesn't care about Ms. Cyrus fussing over makeup or clothes, because he thinks she sexiest she's eating steak sandwiches. "When I look over at her when she's biting into a steak sandwich and there is some steak sauce dripping down her chin, there is nothing sexier than that," Hemsworth said of his famous GF.

She is terrified of needles, yet she has several tattoos.

Even though she has a phobia of needles, Cyrus has more than five tattoos. She has a tat on her chest that reads 'Just Breathe' (written in her mom's hand writing!) and it's an homage to a close friend of Miley's who passed away from cystic fibrosis in 2007. It's also a dedication to Miley's grandfathers, who both died of lung cancer. "It reminds me not to take things for granted. I mean, breathing—that was something none of them could do, the most basic thing," she said. "And I put it near my heart, because that is where they will always be."

Can you imagine what a family party is like at the Cyrus house? With Dolly Parton as one of the guests, it's sure to be a good time! The iconic country singer (whose assets and eccentric outfits are almost as famous as her musical legacy) is actually Miley's godmother! "She is the nicest person in the world. She’s so easy to talk to. I love her," Miley said of Dolly. "She always tells me just to do what I love and if I’m not having fun it’s not working." Parton has even appeared on two episodes of 'Hannah Montana' in the past as "Aunt Dolly."

Miley was born with a heart condition.

'The Climb' singer was born with tachycardia -- don't worry, though! Tachycardia isn't a life-threatening condition, but it does cause Miley's "resting heart rate to excel faster than normal." Cyrus once spoke about the condition in her autobiography (via MTV), writing, "The type of tachycardia I have isn't dangerous. It won't hurt me, but it does bother me." However, when she is dancing and performing for crowds in concert, she said that "there is never a time onstage when I'm not thinking about my heart."

Miley almost didn't get the lead on Disney's 'Hannah Montana.'

Can you imagine anyone else portraying starlet in disguise Hannah Montana? Neither can we! Well, believe it or not, Miley almost didn't score the leading role back when she was 11 because producers felt she was "too young and too small." However, at age 12, show execs called her back and asked to star on the show as Miley Stewart AKA Hannah Montana. They even changed the character name from "Chloe" to "Miley."